Thank you for your donation and for signing up for the Voces Arts and Healing Newsletter. Our goal is to periodically update people who are following and supporting Voces Arts and Healing, to bring you information about our trips, what we are currently raising money for, therapies and trainings we are offering and other regional breaking news.Voces Arts and Healing is a self-organized, volunteer group of expressive arts therapists, psychotherapists and educators who have all worked with complex trauma. Our mission is to offer ongoing expressive arts therapies in an effort to support the psycho-emotional health needs of asylum seekers in the US and Mexico. Our work is currently focused on the shelters in Ciudad Juárez, Mexico.Our teams of expressive arts therapists, clinicians, artists and educators have been traveling to the region since December 2019 and have been given access to over 17 shelters, which roughly house 300 children and their families. The numbers are constantly shifting and some of the shelters are in undisclosed locations, as they house highly vulnerable individuals and families.Due to the Covid 19 pandemic, we are currently unable to travel to the Ciudad Juarez shelters and bring trauma based expressive arts therapies to asylum seekers and their families. We hope to return to the shelters in August. In the meantime, we are partnering with other organization in the region such as Seguimos Adelante, an El Paso based non-profit, grassroots organizations which visits the shelters several days a week and provides asylum seekers with the holistic aid they need to support themselves and their families. Seguimos Adelante is also working closely with the United Nation’s organization IOM (International Organization for Migration). Other groups we are partnering with are COESPO, the State Population Council of the State of Chihuahua, a government agency in Ciudad Juárez run by Enrique Valenzuela. He and his staff have been very supportive of our work in the shelters. COESPO is responsible for promoting and coordinating health, education, work, housing, the equality of men and women, the protection of family rights and the economic and social well-being of all people in Ciudad Juarez. We are also working closely with Lucero De Alva who works for the Organización Mundial por la Paz (World Peace Organization)Training and SupervisionVoces has been spending the past three months focusing on creating webinar trainings for those shelter support staff and therapists in the regionwho would like to integrate expressive arts therapies into their work with asylum seekers. We have created eight education modules as well as specific interventions that can help with the added challenges asylum seekers and migrants now face with the Covid 19 pandemic. We are also offering weekly counseling support to service providers in the region.In addition, Smart TVs are being purchased by the UN organization IOM (International Organization for Migration) to put in all the shelters in Juarez. We are helping Seguimos Adelante raise money to purchase additional equipment to outfit the Smart TV’s with increased conferencing abilities. This will allow asylum seekers and migrants to access video conferencing platforms, like Zoom, which will help them connect with family members, legal representation and also allow us and others to provide ongoing educational, therapeutic and recreational programs for children and adults in the shelters.

“Juarense y Poderosa” is a mural in Ciudad Juárez painted by Los Angeles artist El Mac, “The mural is based on photos I took of a young woman from there named Diana who lost her mother to kiknapping.”

Ciudad Juarez, Mexico Regional NewsVoces practitioners last visited the shelters in Ciudad Juarez, Mexico on March 7-12. Practitioners Kelvin Ramirez, Devon Govoni and Joe Mageary traveled to Ciudad Juarez with a group of 15 expressive arts therapy students from Lesley University in Cambridge, Massachusetts. While there, they offered intermodal expressive arts therapies to children and their families in eight shelters.We have learned from our partners in the region, that because of Covid 19 the shelters in Ciudad Juarez are now in lock down and not admitting new refugees. The Padre Trego shelter which is staffed by Cuban doctors, serves as a 14 day quarantine shelter. Seguimos Adelante is in the process of renting a motel with 50 rooms that could help house refugees and their families who need quarantining. One of the asylum seekers explained: “When you’re [in the shelter] you’re safe. It is very dangerous for migrants to leave the shelter because we become targets for cartel extortion.” There is an added danger facing women and girls when they leave the shelters. Crime directed at women (many of whom are activists or asylum seekers) is common, so common that feminists in the region call it femicide. In the last three decades, hundreds of women have been brutally killed in this city, with some raped, tortured and trafficked. Many of these cases remain unsolved.Life in the shelters means constant waiting and working to co-create a safe space while living with a population that is in constant flux. Some children at the shelters are separated from their parents, who were denied asylum in the US. It is unclear when they will be reunited. Before Covid 19 many adults living in shelters were leaving to go to work during the day. Others waited at the Paso Del Norte Bridge, which crosses the border from the US to Mexico, for their asylum cases to be called and reviewed by US Immigration.Voces discovered that the prevailing opinion in the region is that migrants and asylum seekers are well-regarded. Many local businesses have hired them and many new, local businesses have been started by them as well. Though Covid 19 has impacted the region, Enrique Valenzuela, the Minister of Population for the state of Chihuahua told us in March, “Anybody who wants a job can generally get one.” Typically, asylum seekers are young adults with families. Enrique also told Voces that COESPO has processed 10,000 people in the past 6 months and 10,222 the prior month. We were surprised to learn from him that Ciudad Juarez has 20,000 vacant houses. Enrique explained that entire neighborhoods are empty: “We have the space, economically and geographically. There is space for everybody.  We should not be afraid. We should not fear migration.” This stance toward immigration is radically different from the xenophobic and racist views of the current US presidential administration.Fundraising GoalsAt the Current time we have two main fundraising goals:1.Our first goal at this time is to help Seguimos Adelante provide basic food and health care to asylum seekers who are having to live outside the shelters in Ciudad Juarez because of Covid 19. A $25 donation will provide food for a family of four for a week.2. Our second goal is to partner with Seguimos Adelante and help to raise money to purchase additional equipment, that will outfit the Smart TV’s that are being purchased by IOM, for increased conferencing abilities. This would allow asylum seekers and migrants to access video conferencing platforms, like Zoom, which will help them connect with family members, legal representation and also allow us and others to provide educational, therapeutic and recreational programs for children and adults. When you press the donate button below you will be redirected to our fiscal sponsor The Art Therapy Institute’s fundraising page on Network For Good. Once there, you can choose which area of need you would like to support. From all of us at Voces, we wish to say thank you, gracias, for your generous ongoing support and continued concern for the welfare of asylum seekers and immigrants in the Ciudad Juarez region!!If you would like to get involved or have ideas that could help us raise funds to support asylum seekers in the US and Mexico, please contact Greta at info@sarahm40.sg-host.com 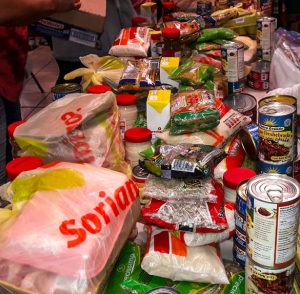 Please consider donating money for food for refugees on a monthly basis. A $25 donation provides food for a week for a family of four. Voces is partnering with Seguimos Adelante, a non-profit grassroots organization who provides asylum seekers with the holistic aid they need to support themselves and their families. To learn more about them go to their website:
https://www.seguimosadelante.org/ 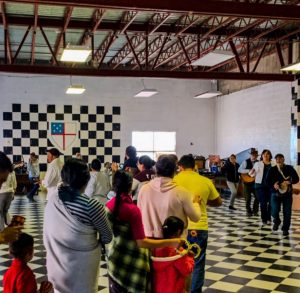 This will allow asylum seekers and migrants to access video conferencing platforms like Zoom so they can connect with family members, legal representation and also helps Voces and others provide educational, therapeutic and other programs for children and their families.